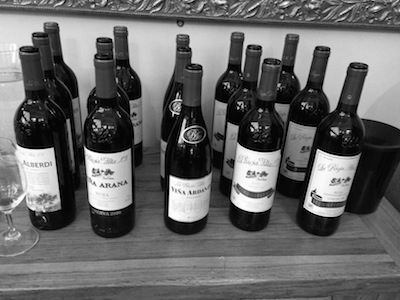 The Wines of La Rioja Alta, stunning one and all and impressively varied.

As a country there are few wines the UK has embraced as loyally and as passionately as Rioja; and on the world stage there are few as instantly recognisable. Our supermarket/Off-license shelves may be prone to the fickle winds of change but you can always find a few bottles of Rioja to choose from.

Rioja Alta is one of the three mountainous regions Rioja is built around (the other two being Rioja Alavesa and Rioja Baja), and of the three it is the highest in altitude and produces wines with the highest acidity and potential for ageing. La Rioja Alta, as well as being named for the region is also based around the town at its beating heart, Haro, which is also home to Bodegas’ Muga, CVNE & Roda…

…Which I realise may mean nothing to any of you!

So let’s try again… La Rioja Alta is one of the top few of vineyards in Rioja… figuratively and literally.

Whether it is in fact the best or not depends on personal taste. However, Theo Sloot, resident wine guru and Rioja specialist at the Oxford Wine Company, firmly believes it is… which brings us to a tasting he set up at Oxford Wine Café with Francisco Corpas (Export Area Manager for the company), leading us through the wines. 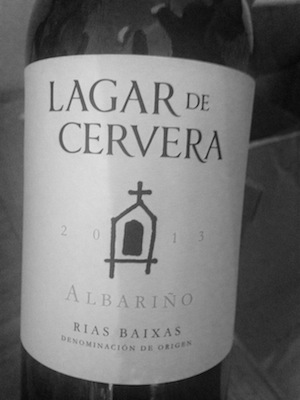 Right off the bat I have something to confess… when I first saw this wine, I didn’t even have time to wonder why the first wine of a Rioja tasting wasn’t a Rioja at all… no, I was far too busy trying to wrap my work-addled brain around a wine called ‘Lagar de Cervera’ or as I dyslexic-mind-spasmed it “Larger de Cerveza (Beer)”. Seriously… I almost raised my hand to check it was actually wine.

Mercifully Francisco saved my bacon by explaining La Rioja Alta did used to produce a white Rioja but stopped doing so as their neighbour’s whites were far superior. Instead they bought a vineyard in Rias Baixas and started producing this 100% Albarino wine; while focusing on producing their range red Rioja that were far superior to their neighbours… Humility, it seems, only goes so far after all!

For an Albarino this one has a surprising commonality with Sauvignon Blanc. Pale Lemon colour with a hint a green twinkling within and an aroma of intense citrus (grapefruit) and gooseberry fruit, with elderflower and a wet stony breath of minerality at its heart. The acidity is astonishingly high but impressively controlled with a medium bodied viscosity to add depth and weight to the Lemon juice and Lime wedge fruit on the palate. There’s salinity as well to this wine that always reminds me of sea spray as well as the characteristic sherbet lemon fizz Albarino so often shows.

A surprisingly serious and focused wine, one that I imagine has been designed surgically to work with fresh seafood tapas.

I may have been tired at the start of the tasting but the sherbet acidity of this wine was like chewing a whole packet of ‘Refreshers’ or a ‘Sherbet Dib-Dab’… it woke me up like a startled meerkat! 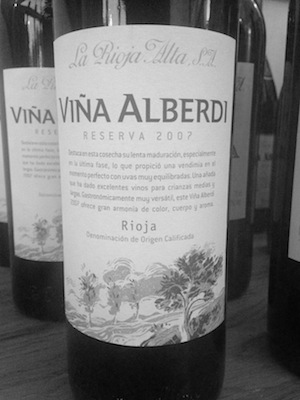 Entry Level this may be, but La Rioja Alta’s first wine of the night would wipe the floor with most Rioja out there… soundly!

As the first Rioja of the evening was poured, you could actually hear the crowd’s appreciation and surprise at how good this wine was. It may well be the vineyards entry level Rioja, but it’s still a £17 wine, worth every penny off it and easily able to wipe the floor with most other Rioja out there.

It’s made from 100% Tempranillo and made each year (their premium wines are limited to the best years), allowing them the break in new oak barrels, which would otherwise be too harsh for their top quality wines to age in. But don’t let that fool you into thinking there is anything inferior about this wine. Their flagship wines are limited to a certain number of vintages per decade, the rest of that amazing fruit trickles down to this wine and is made with all the care and attention their others are.

The ‘Vina Alberdi’ has a Medium deep yet bright translucent ruby colour, aromas of intense red fruit (sour cherry), and the classic Rioja trio of cigar box, leather and coconut… all of which are perfectly balanced with each other in seeming infinite layers and interactions.

The aroma alone put me in happy place.

On the palate, it has a good high acidity, bright fresh red fruit (sour cherry, cranberry, redcurrant), Integrated Oak that’s present but a well-balanced component of the whole and a long gamey finish.

In many ways there’s a duality at the core of this wine; it has all the complexity of an older wine alongside the bright fresh youthful fruit of a younger one. Personally I see this as a good thing… technically it come across as trying to go in separate directions, though for me both are happy places and as such a win-win situation!

The slight lack of focus in the ‘Alberdi’ is cleared up from this point on and the rest of the wines are far more secure in their identity. That said, all these wines are so good and so different that any of them could wind up your favourite over the others. This is a superb wine and not to be underestimated. 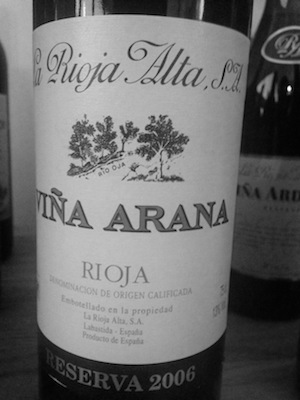 A lush, purple tinged, black cherry surprise that stand out from the crowd as something different and worthy of attention.

There’s so much 100% Tempranillo Rioja out there that it’s easy to assume the style of wine it makes is all there is… where in truth the region has a huge diversity to it. The addition of even a small amount of differing grape varieties can result in a vastly different wines.

The ‘Vina Arana’ is made from 95% Tempranillo and 5% Mazuelo (Carignan), resulting in wine with more of a black fruit profile to it in addition to the red. It has a deep purple-black ruby colour with an aroma of black Morello cherry, tobacco leaf, vanilla and coconut. The acidity at the heart of this wine is even higher than the in the ‘Alberdi’ (thanks to the 5% Mazuelo), though still tightly controlled, making this an ideal food wine. On the palate there’s dark lingering black fruits (Black cherry) and leafy forest minerality, giving the impression of a posh jubilee pancake.

This is a wine that has personality in spades and a distinct identity. It’s a wine to defy expectations and a real showcase for the variety available within the region… very different from the typical expression of Rioja today. 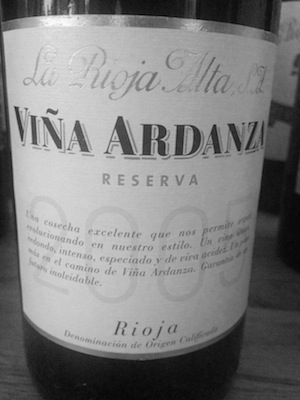 Complex, layered and balanced, as fine an example of traditional Rioja as I’ve ever tasted.

The ‘Vina Ardanza’ on the other hand is a fine example of traditional Rioja Reserva, a blend of 80% Tempranillo and 20% Garnacha (Grenache). In fact, in terms of ageing, it could be considered a Gran Reserva (it’s had 3 years in Oak and 5 in the bottle), though it is very much ‘Reserva’ in style.

It has a deep ruby core running to classic ‘Brick’ tawny at the rim with broad complex aromas of Horse Saddle leather, tobacco leaf, nutmeg, coconut, white pepper (from the Garnacha), and a faint whiff of mint surround the ripe sour cherry fruit core. On the palate the red cherry/plum fruit is bright and lifted with a high acidity and firm tannins built to age, alongside cinnamon spice and liquorish that lend a brooding savoury edge to the wine.

The finish? It just keeps going until it disappears somewhere over the horizon… where I assume it is still going!

Overall this is closer to the ‘Alberdi’ in style than the ‘Arana’, but where the ‘Alberdi’ was flirting with being a Crianza, The ‘Ardanza’ is clearly a mature and focused Reserva that wants taking seriously.

Of the three so far, this is my personal choice… the Nom is strong with this one.

However, should you find yourself with £40 burning a whole in your pocket, then its time for something special! 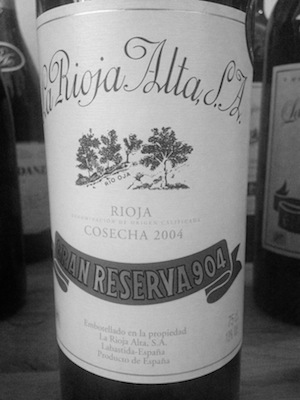 A Gran Reserva to make other Gran Reserva weep… Expensive by anyones standards but given the choice between a bottle of average Nv Champagne and this… I’m choosing the 904 hands down!

Now I, like many of you, have had a lot of poor Gran Reserva over the years; woody, teeth coating and tasting suspiciously like cheese biscuits… what fruit there once may have been, having fled the scene long ago. Well, the ‘904’ is a Gran Reserva to make other Gran Reserva weep… so much so it’s in a classification of its own. For me it highlights that it’s not enough simply to age wine for longer in oak, but it’s the quality of fruit required in order to do so, that makes a real Gran Reserva work.

Bright Deep Cherry Ruby colour running to a light tawny at the rim, with a bucket of buttery Rioja joy leading an aroma of Cigar box, tobacco leaf, intense coconut, and an array dried Christmas fruits (fig, prune, raisin). Bright sour red cherry and plum bloom on the palate within alternating layers of old worn leather, cedar wood, pine and heather. Acidity is as ever high and on point with well-integrated tannins that show plenty of life in them… this is a wine that will age for 20 years more yet.

Intense, visceral, insistent… this is a wine that has so much depth of complexity to it, that it makes me want to invent words to describe it.

This may be an expensive bottle by any definition, but rest assured it’s one where every penny is left visible in the glass. 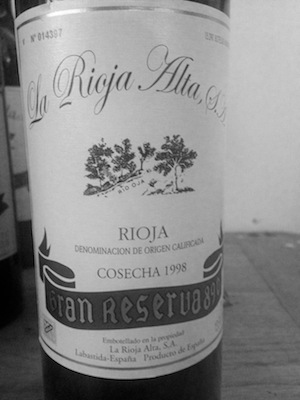 The big granddaddy version of the Vina Arana… a special wine for very special occasions and priced accordingly!

The ‘890’ Gran Reserva is one of the most expensive wines I’ve ever tasted and before I move on to talk about it, I want to quickly talk about price vs. value.

Following this tasting one of my friends asked me an important question regarding the cost of this wine… he asked whether it tasted ten times better than an average £10 bottle of Rioja… and the answer is no.

But that’s because after a certain point, you start paying for what makes a wine special rather than the cost of producing wine itself. In the 809s case, only three vintages of this wine are made every decade and it’s bottled in small limited amounts. So a large portion of the price of this wine is going on its rarity; another way of putting it would be that there’s more to appreciate with this wine than simply the wine itself.

That said… it is awesome!

Bright vibrant ruby with an intense orange rim and aroma of red and black fruits (Red cherry/black cherry, plum/redcurrant), coconut, vanilla, chocolate, mint, tobacco leaf, mushroom and forest floor; all of which unfold on palate with earthy, gamey characteristics and a fresh acidity to balance. The tannins are spot on and integrated, though as with the ‘904’ they have plenty of life left in them for this wine to develop… and it will for another 20 plus years!

That tiny 2% of Mazuelo transforms this wine into something closer to the ‘Arana’ in style than the ‘Ardanza’, but with ‘904’ lying just beneath surface. It’s an incredible wine that, like the ‘904’, I’m sure is only starting to hint at its promise… in another 10/15 years who knows how much more this will have developed.

I don’t often do this, but I want finish by saying thank you to Theo and Francisco for making this event possible… I’m not sure where the subsidy came from (whether the OWC, the Vineyard or from both), but the event was heavily subsidised to a humbling degree… So thank you gentlemen, it was very much appreciated.

As ever, please let me know what you thought of this article, I need all the feedback I can get mitts on!