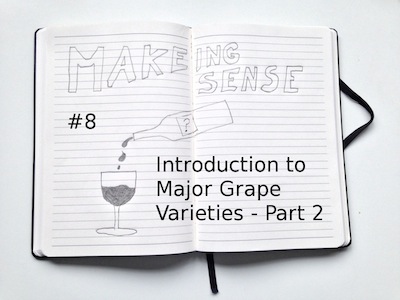 (Or… “Is it just me or this article taking forever!”

You’ll notice from the remaining grapes being covered in this part of the article that only one of them is white. If you look at the selves at your local supermarket and you’ll find the white wine section is predominantly composed of three major varieties: Chardonnay, Sauvignon Blanc & Pinot Grigio. The first two I covered in part 1 and I’ll handle the last one in this part. There are plenty of other varieties to be found on the shelves too, especially Chenin Blanc & Viognier, but in nowhere near the same quantities.

The Red wine section on the whole is more balanced in its range of red varietal wines (single grape reds) and often has more blends on offer too. So I’ll be spending more time on the reds in this Part. 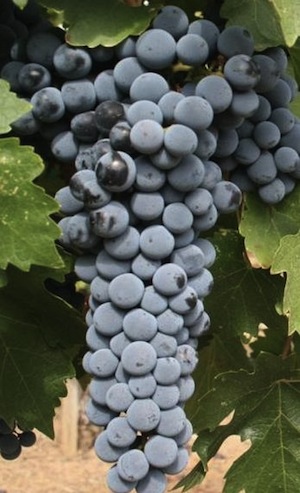 Cabernet Sauvignon is one of the most widely known and widely grown red wine grape varieties.

The Grapes Character: It’s a cross between Cabernet Franc and Sauvignon Blanc and has only been around a relatively short time in grape growing terms. As well as growing almost anywhere, the vine is a hardy one and tends to be resistant to frost and rot due to late ripening and loose grape bunches allowing for air to circulate. The grape skins are thick, not unlike Shiraz/Syrah and have high amounts of tannin in them, so they tend to make Medium-Full to Full-Bodied wines and oak ageing is almost mandatory.

There’s less of an old/new world distinction with Cabernet Sauvignon, as so much of the style and the final character of wine is down to decisions made my the wine maker.

In cooler climates the grape produces characteristics of Blackcurrant (Cassis) & Blackberry in terms of fruit and Cedar, Tobacco & Vanilla from oak ageing. These wines can have a dry savoury edge that’s often described as being vegetal (a characteristic associated with vegetation rather than fruit) and tasting of Green Bell Pepper (where grapes have struggled to ripen), though I usually stick saying savoury to avoid the glazed expressions! Whereas in warmer climates, a richer more jammy wine is made with additional characteristics of plum and eucalyptus, these tend towards being sweeter and having more vanilla.

As Cabernet Sauvignon has become a household name around the world most of the above have fallen into disuse. 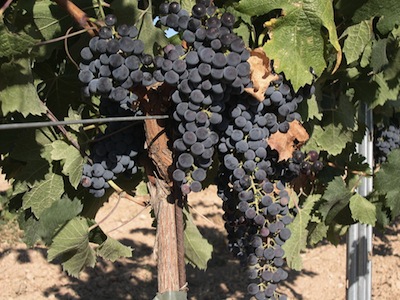 Sometimes our tastes are influenced in the oddest ways and all it took to knock Merlot of top of the UK budget wine buying charts was the film – Sideways. In the film the main character repeatedly slates Merlot wines and praises those made of Pinot Noir. So like all good lemmings we stopped buying so much Merlot and dove headfirst in to Pinot Noir! If you haven’t seen the film… then do it’s excellent. But as with Chardonnay, just because a grape gets a bad reputation, doesn’t mean it’s justified. More often than not it’s cheap wine, made by cheap vineyards, for cheap retail that deserves the slating… not the grape.

The Grapes Character: Merlot really is the soul brother of Cabernet Sauvignon and they are two of the most widely pared grapes for blending. Where Cabernet Sauvignon provides the tannin structure to blends, Merlot brings the fruit and richness. As its skin is thinner, it’s also more of a medium-bodied wine and so helps to reign in the weight of the blend as well.

While Cabernet Sauvignon displays blackcurrant/blackberry fruit, Merlot tends more towards plum when harvested late in warmer climates and raspberry/strawberry when harvested early in cooler climates. Both respond well to oak ageing but Merlot does it with more intensity and develops stronger vanilla and toasty aromas. It’s lower tannin levels allow for more opportunity for un-oaked fruity varieties of wine to be made from it as well.

Mostly know to the world as Merlot though. 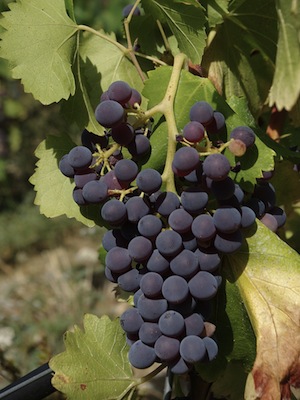 Grenache is a funny old grape and responsible for some of the confusion regarding the nature of full-bodied but soft wines. It’s often used heavily in blends, especially in the Rhone region of France, but can you find some really interesting single variety wines made from it and often from old vines that lead to some unique characteristics.

The Grapes Character: Grenache has a strong and hardy vine that’s often resistant high winds and drought, which makes it a perfect grape to grow in arid areas. However, the grapes themselves have thin skins and are prone to spoil making yields low. This does have an unexpected bonus though, as the lower the amount of fruit produced on these vines, the richer and more complex the wine tends to be. In fact Grenache tends to loose most of its character where yields are higher, so vineyards cultivating these vines often work the vine to keep it low on purpose.

So if the skins are thin, why is Grenache typically a full-bodied wine? Grenache grapes ripen late in the season which means there’s a lot of sugar to turn into alcohol; the arid conditions it’s grown in also lead to a concentration of the fruit, resulting in a wine with a high fruit density and high in alcohol.

With the thin skins we have low tannins so use of Oak tends to be reduced and we get a fruiter style of wine even with the depth and richness. Typically Grenache has character of berry fruits like raspberries and strawberries and when yields are kept in check then blackcurrant, black cherry, black olives, leather, white pepper, tar and toffee.

Common Blends: with Shiraz & Mourvedre (known as GSM in Australia); with Shiraz & other Rhone grapes for Cotes-du-Rhone; with Tempranillo in Spanish wines. 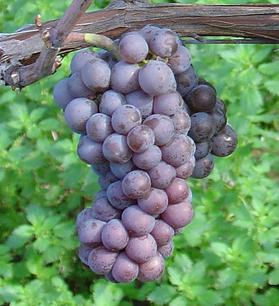 Pinot Grigio is the third shelf stocking white grape variety and currently our biggest seller in the UK. It’s actually the same grape as Pinot Gris, but as the style of the wine made under the different names varies so much, they’re often thought of different grapes. The Pinot Grigio name comes from the Italian way of referring to Pinot Gris. I suppose it does sound a little more Ciao!

Colour of Grape: Rose skinned, greyish blue or even white.

The Grapes Character: As you may guess from the first part of the name, Pinot Grigio/Gris come from Pinot Noir. How? Well the Pinot Noir grape has a very unstable genetic code, meaning it has a tendency to mutate and change its nature every now and then. In this case some vineyard owner planted some Pinot Noir way back and to their horror ended up with something else entirely! This leads to some interesting variety even among clearly identified Pinot Grigio/Gris grapes, hence all the colour possibilities.

Most of the grapes are greyish/blue to rose red, which may be surprising as we’re talking about grapes for white wine. At the start of this article I explained that all grape juice is white, it’s the skins of red grapes that contain the red colouring and the tannins etc. So in the case of Pinot Grigio/Gris, the grapes are harvested and then processed in the white wine method.

The style of Pinot Grigio that’s become popular in the UK is biased on the Italian style and is an early harvested, fresh, light-bodied wine that is light in colour and crisply acidic.

Pinot Gris tend to be medium to full-bodied wines, with richer tropical fruit characteristics of melon and mango, and some of the spicy character found in grapes like Gewürztraminer, Grüner Veltliner. They can also undergo oak ageing to bring out more complex characteristics.

I thought I’d also cover a few grape varieties that are more country specific because they’re big sellers on our supermarket shelves and you’ll recognise the wines they’re found in more than the name of the grapes themselves: 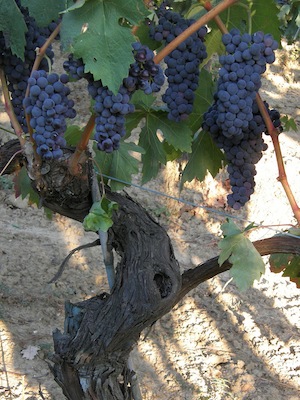 You may not recognise the name of Tempranillo but I’m sure many of you recognise a bottle of Rioja when you see one. This is the major grape variety used in Rioja. Rioja uses other grape varieties too but most will have predominantly Tempranillo in there.

The Grapes Character: Tempranillo, like Cabernet Sauvignon and Shiraz/Syrah, has a thick tannin rich skin that lends itself to extended ageing in oak. The major difference with Tempranillo is that it ripens early and as such tends to be low in acidity and sugar content, which is why it is mostly used in blends. By adding Grenache (Garnacha in Spain), that ripens later and has the opposite problems, a clever balance is found.

Tempranillo also complements Grenache in so far as it has a robust vine that produces a high amount fruit, where Grenache is low yielding. The most common blends is up to 90% Tempranillo and 10% Grenache. By combining the two, vineyards are able to produce a greater quantity and a better quality of wine.

It makes wines that are ruby in colour, with a character of berries, plum, tobacco, vanilla, leather and herbs. It’s those tobacco, leather, vanilla characteristics that get brought out and enhanced through oak aging.

To make matters more confusing, not only is Tempranillo known by different names, but typically by different names depending on where you are Spain… such as: Tinta Fino in Ribera del Duero, Tinta de Toro in Toro and Ull de llebre in Catalonia. Strictly speaking each of these is a different ‘clone’ of Tempranillo and as such they are slightly different… but only slightly. The same goes for Portugal where Tempranillo is known as ‘Tinto Roriz’ in the north of the country and ‘Aragonez’ in the south.

Common Blends: with Grenache (known as Garnacha in Spain), Carignan (known as Mazuela in Spain), Graciano, Merlot and Cabernet Sauvignon. 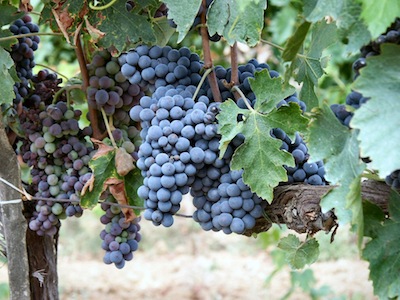 When I think of the most iconic Italian red wines, Chianti comes to mind and I think it’s certainly the most readily available and identifiable of Italian wines in the UK. Sangiovese is the major Grape used in Chianti.

The Grapes Character: Sangiovese has a similar problem to Grenache, in that it suffers a distinct quality loss when yields increase on the vine, leading to light-bodied wines with high acidity. Which is why it is most often blended with other grapes to fill in the missing pieces. Single variety wines are made with Sangiovese, but like Grenache again, it’s usually through old low yielding vines.

Young (un-oaked) Sangiovese has fresh fruity flavors of sour cherry and strawberry. It also tends to be high in tannin and responds in a big way to ageing in oak, bringing out sweet vanilla and tobacco characteristics. Depending on the wine maker and the vineyards terrain/climate, Sangiovese sometimes has a character of Tomato Leaf and other herbs.

Are you cross-eyed yet? Because I know that I am! I hope this article has been useful without being too heavy on the mumbo jumbo or full of stuff you really didn’t want know. Please let me know you think… and if want info on other gape varieties let me know which ones and I’ll add future articles for them.

The next ‘Making Sense of it all’ guide will be on: Food and Wine.