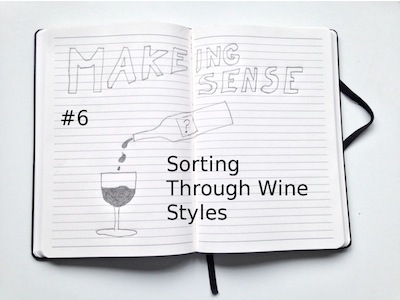 (Or… “Since when is the opposite of Dry, Sweet? I thought it was Wet!”)

One of the difficulties in talking about wine is in trying to communicate effectively what you’re trying to say. We all think differently, which is hard enough, but we process tastes differently too. The character in a particular wine that for me tastes like strawberries, might remind you of something completely different.

We’re seldom honest about it though… especially at wine tastings. Mostly we listen to the guide in the know and nod along with impressed expressions; occasionally uttering a grunt of surprised recognition to indicate we have indeed tasted what they’ve told us look for. Well… from the sheer speed at which most of the group is ejecting wine out of their mouths as soon as the guides back is turned, I know I’m not the only one who thought that wine tasted of dead leaves and cabbage!

My point is that even when dealing with something as supposedly clear cut as wine style indicators on the back of a bottle, we can still be talking and thinking at cross purposes.

The theory is simple enough:

The confusion starts setting in when you realise that not everyone agrees on what’s meant by these terms, not even the vineyards producing the wine half the time.

Typically the white scale is represented on the shelf or bottle as numbers: running from 1 (Dry), to anywhere between 5 to 10 or more (sweet to luscious).

Officially the scale is an indication of the amount sugar left in a wine after fermentation has run its course, but in terms of ‘wine styles’ and the way we think about wines, the scale is talking about two separate issues: At the ‘dry’ end of the scale, numbers 1 to 3, are describing how dry the wine is (the drying effect the wine has on your mouth or the lack there of); whereas the sweet end of the scale, numbers 3 to 5 (or up to 10), is dealing how sweet the wine is (the amount of sugar still present).

At one end a customer is looking how little sugar there is, and at the other end looking for as much as possible… semantics I know, but its important look at what a customer is hoping to get from the scale because the overall impression a wine gives about how ‘sweet’ it is depends on more that just its sugar level… higher levels of alcohol and glycerol in a wine increase our perception of sugar and higher levels of acidity decrease it.

The problem for me with this method is that it’s trying to do too much with too little and where a wine is placed on the scale can become subjective. Someone who can’t stand sweet wines is going to throw their toys out the pram to discover one mislabelled as a ‘2’, as will the dry wine hater when they discover their medium-sweet bottle has an acid edge to make their eyes twitch!

Red wines are often described in terms of their ‘body’, and as with the ‘dryness’ of a white wine, this has to do with the feel or weight of the wine in the mouth. This often gets confused with how powerful a wine tastes, which is understandable as many full-bodied reds can make your eyeballs spin, but that is not what’s being indicated here. Think of it as the density of the fruit in a wine and not the strength of its flavour… multiplied by its level of alcohol, which for those who are alcohol sensitive increases their perception of its density.

Typically the scale for reds is represented on the shelf or bottle as letters: running from A (Light-Bodied), to E (Full-Bodied).

So the scale looks likes this:

At a glance it looks like things are more consistent for the red’s than for the whites… and they are. The problem is that most of us have a tendency to think of powerfully flavoured wines as full-bodied, even when they’re not.

I always find it interesting to see where restaurants and bars have placed wines on their wine lists. Have they placed wines by their label definitions or have they tried them and then placed them how they think customers will view them? There’s almost always something placed well outside of its official definition.

More often than not the level of body a wine has will be linked directly to its alcohol level… so wines that are 14%+ will be described as full-bodied regardless of what they are.

Personally I’d like to see more indicators on bottles, so other important aspects of a wines character can be highlighted, and hopefully reduce some of this uncertainty.

How about a ‘Light to Full-Bodied’ scale for white wines, they vary every bit as much as the reds do in their density. And what about a ‘Dry to Sweet’ range for the reds, they vary as much how much sugar remains. As it happens M&S have started putting light to full-bodied indicators on their white wines… Its time others caught on too.

There are other characteristics that have become divisive for shoppers over the last few decades, such as the use of oak or the sharpness of wines.

I have a friend who loves his white wines seriously dry, but if he gets a whiff of oak from the wine he’s put off it; Other friends, who love their whites Dry, Full-Bodied, and creamy from use of oak, won’t go near the Un-oaked fruitier variety because they find them too sharp and tangy for their tastes.

I think this has become as important a choice indicator for customers as the Dry/Sweet divide has been in the past. Its high time we had scale for Oak: ranging from ‘Un-Oaked’ to ‘Heavily Oaked’, used on a regular basis.

Personally I’m not the biggest fan of the sharper wines, red or white, but if you’re looking for something to match with a dressed salad or anything with lemon on it, then you’ll need a sharper wine to balance it out. Otherwise that carefully balanced wine will loose all of its acidity and you’ll be left with fruit juice!

Where this happens in the wine itself, usually due to over ripened fruit (normally the cheaper harvest left on the vine longer), the wines are described as being ‘flabby’ and they often have a cloying thickness too them. Flabby wines are every bit as unbalanced as their ‘too sharp’ siblings and just as undesirable for most customers.

I’d like to see a scale to reflect this, ranging from Flabby to Sharp, and if that’s too on the nose, then from Fresh to Jammy. I’m not expecting wine producers to admit to their wines being too acidic or to having none, but it would be nice to have an indication of which side of balanced a given wine is leaning.

For my reviews I’m going to try using these extra scales and I’d love to hear your thoughts on whether you find them helpful and what other indicators you’d like to be highlighted. Please let me know what you think of the article too.

The next ‘Making Sense of it all’ guide will be on: An Introduction Major Grape Varieties.