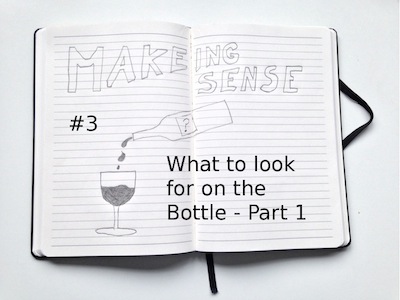 (Or… “I finally find one in English and it still makes no sense!”)

One of the most frustrating issues for me when I’m looking for bottle is how different the labels are. I just about get a handle on what I’m looking at with one and then I’m lost again on the next. The main problem is that labelling conventions can be obscure, if not outright contradictory, from one bottle to the next.

Countries often have a set of loose regulations governing what should be on the label, but that’s only the starting point. Each wine producing region will often have it’s own separate set of regulations and beyond that each village within it may as well… and that’s assuming they stick to the rules!

For this article I’m going to deal with what’s on the back of the bottle and share some idea of what I’m looking for when I’m trying to separate the wheat from the chaff.

First off, I’m sure you’ve all had the experience where you find a likely looking bottle, spin it around and find… nothing but a barcode! Unless you’re shopping somewhere like M&S, who insist on sticking their own rear labels on all the bottles sold in their stores, then this is a real possibility and a very unhelpful one at that.

A lot of wines produced in smaller vineyards, villages or in-between wine producing regions, have a tendency to not bother with descriptions of their wine. As far as they’re concerned, you either know their wine or you don’t… and I’m looking squarely at you France, yes you! Pride in the fruit of your labours is one thing… but really? Come on!

Admittedly you are far more likely to come across this shopping in a off-licence or wine store than you are in supermarket, as they tend to deal with large scale wine importers who are likely to add their own labels. If you’re lucky the store will have written up their impressions of the wine for you and if not, don’t be afraid to ask them, they should be able to tell you all about it. If they can’t, or if they start waffling on about the “south side of the slope and good sunlight”… then skip it and move onto something else! Maybe it’s just me… but if I’m buying a bottle of wine I’m interested in what it’s actually going to taste like.

Are specific growing conditions important? Very… but I’d argue that there are far more important things to know about the terrain vines are grown in than the angle and direction of the slope.

And it’s written in a language we can actually read…

What I’m looking for on the bottle description is some sign or combination of the bellow:

Bottled by the vineyard itself: There are a lot of vineyards out there that either sell their whole crop or parts of it to third parties who will then blend it all together and make wine from lots of different sources. Even if only one grape variety is being used, the grapes themselves often come from many different areas. The crops used in this way, to say the very least, have a question mark hanging over them. Everything used could well be of the highest standard, but the chances of something involved not being so, are high. Where vineyards have done their own bottling they have a tendency to advertise the fact, such as… “This wine has been bottled by the vineyard itself…” The French in particular are very keen to let you know this. What you need to look for on French bottles is the word ‘Mis’, often in a statement like “Mis en Bouteille a la propriete” or “Mis en Bouteille au Chateau”. If they have been bottled by a third party then sometimes they’ll own up to it… but mostly they’ll stay silent, so make sure to check and know what you’re getting. Please note: I’m not trying to cast doubt on wines that don’t mention who carried out the bottling, as many don’t… I’m suggesting you take notice when one puts its hand up and says “hi, we bottled this ourselves.”

Regionally Sourced: What I’m looking for here is evidence that all the grapes used in the wine have come from vineyards within the same specific wine growing region. The terrain grapes are grown on has a lot to do with the overall character that wines develop. Even where grapes are being sourced from several different locations, so long as they’re from within the same wine-growing region, the end result tends to be fairly representative of the region itself at least. Even though there can be a lot blending going on, the characteristics unique to that region will still tend to shine through. Is this guaranteed? No. But your chances of finding something more interesting, with greater character and complexity are going up. If wine producers have an extended range of wines, then they’ll tend to spend more time on wines they’re highlighting as regional blends, compared to their entry level offerings like ‘Bob’s red blend’.

Estate Sourced: Here I’m looking for an indication that the Estate has cultivated everything going into this wine directly. This is a whole step up from the ‘Regionally Specific’ wines. More control, more care & attention. For most vineyards, this is the case for all their wine. Larger more corporate companies will own several vineyards but will also buy in grapes from out side to increase production volume. It also gives them more products to attach their name to and allows them to sell to more niche markets. Have you ever wondered where ‘supermarket exclusive blends’ come from? Bingo! So if you’re going to go for a bottle with a big name on it, check to see whether its vineyard or estate specific (estate specific wines can have grapes from different vineyards owned by the same company). You’ll probably have to pay more, but I think you’ll be surprised by the difference. Or simply go for something from a smaller vineyard.

Parcel Specific: One of the big things I’m looking for is an indication that the grapes going into this bottle have all come from the same parcel, that is to say grapes harvested from vines on the same plot of land, with the same terrain. As there’s no blending at all everything these grapes have that is unique should be on display. Wines that do so tend to have far more going on in terms of character and because they are made carefully and in far smaller amounts, they tend to be far higher in quality. As such they do tend to be more expensive… it’s almost always worth it though.

Small/Limited Bottling’s: Wines made in small limited quantities tend to have more attention paid to them. It’s expensive as the overheads are much higher, so if they’re going to do it they usually do it right. The quality of grapes used and grade of wine tends to be much higher than with larger production. This section really goes hand in hand with the one above as parcel specific wines are limited in quantity by their very nature. These will be more expensive, but not necessarily break the bank expensive; the last two bottles I bought that were limited/parcel specific were £10 each and were so good I was annoyed I’d opened instead of saving them! Please note: there’s a big pitfall to look out for here… watch out for so called ‘limited edition’ wines or wines stating ‘special reserve/family reserve’… Make sure wines indicating a limited run are backing that up with a clear indication of why the run is limited… and what they’re asking you to pay extra for. Sometimes ‘limited’ translates to a small amount made cheaply for foreign export, so be careful.

Low Yielding Vines: Older vines growing on difficult terrain often have a tough time of it. A fortunate side effect of this is that even though the amount of fruit you get is low, the quality tends to be sky high. The fewer grapes there are, the more the vine can concentrate on the ones it has, so the quality of wine they make tends to be all kinds of awesome. However, fewer grapes mean fewer bottle of wine to sell for the same amount effort and cost, so the price will go up, but for all the right reasons.

Biodiversity and other sustainable cultivation methods: Will you be able to taste all the nature loving goodness at work here? No. You will get an extra fuzzy feeling inside… though that might just be wine now that I think about it. What I think is important here, apart from the environmental message, is what this tells us about the attitude of the people running vineyard. Running a vineyard this way costs a lot and if anything they’re going to be losing money: they certainly will be in the short term. You don’t choose to run your vineyard this way unless you care about your land and about your wine. These methods require a much more hands on approach and vines managed this way have to be carefully monitored throughout the year as no chemical short cuts are being used. When all is said and done, perfectionists have a tendency to make the most out of the vines they have, so I take a closer look when I see this.

Competition Awards: There are lots of wine awards that take place annually throughout the world, but two that you’re likely to come across mentioned on bottles in the UK are: ‘The Decanter Awards’ and ‘The International Wine Challenge’. The advantage of these is that a large number of experts are highlighting for you quality of the wine your looking at. The disadvantage is there’s still no guarantee you’re going to like it… All an award does is indicate that the wine in front of you is a good example of that particular style of wine. If you’re not a fan Rioja don’t go buying it just because a panel of experts is telling you this bottle is a great example of Rioja… I doubt it’s going to change your mind all that much. However, If you’ve only had the opportunity to try discount versions of Rioja and you want try some of the good stuff, then looking for an award winning one is a great idea. You might find you just need to stay away from the cheaper versions of that particular style of wine. Please Note: make sure they haven’t just put a sticker on the bottle because the vineyard or it’s parent company has won an award; they do this all the time and it makes it look you’ve found an award winning wine when you haven’t. What you are looking for is a Gold, Silver or Bronze award for that bottle of wine and if you can find a ‘best in show’ award then even better. The awards for businesses themselves can look almost identical, so double check!

In Part 2 of this article I’ll be looking at warning signs you should look out for to avoid picking up a dodgy bottle.