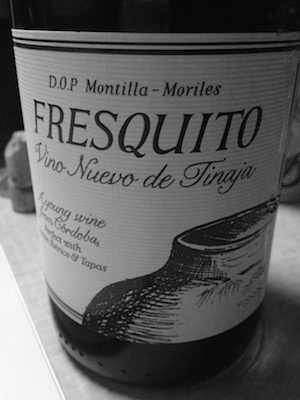 A unique, fascinating white wine, aged under flor in the style of sherry.

This is an unusual wine by any stretch of the imagination. The producer had effectively made an amontillado style sherry using the ‘Pedro Ximénez’ grape variety (PX)… and instead of stopping the fermentation early by adding brandy (which is what usually happens with Sherry), they’ve allowed it to ferment the ‘usual way’. I won’t bore you any more with how and why, but this wine is a strange beasty indeed! It does share many of the distinctive fino/amontillado sherry characteristics, minus the brandy/fortified wine alcohol kick. So if sherry makes you want to gag… this is not the wine for you!

This has a deep gold colour with waxy lemon peel, rosemary herb, cream, flor (think dry yeast) and white blossom aroma. On the palate there’s lemon soufflé, green almonds, toasted pine nuts and butter cream. There’s a full, waxy texture balanced perfectly with the right amount of acidity to cut through. Bone dry as well even though the wine is full bodied and creamy. The finish is long and initially leesy before leading into a more savory ‘roasted nut’ territory. This is a fascinating blend of styles, some where between an amontillado sherry and a full bodied Sicilian style white wine. That said this does fall closer to the wine side than sherry, except for the distinct ‘Flor’ aroma. An unusual yet scintillating wine, though not one for everyone, £9 a bottle from M&S.