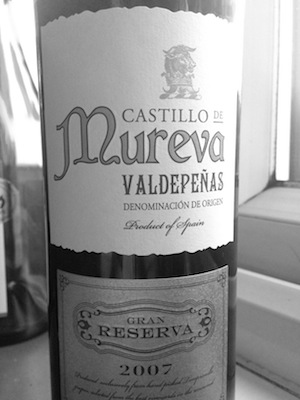 From Valdepenas in southern Spain, this medium bodied ‘migraine friendly’ version of a Rioja, manages to hold its own and adds a smokey edge while it’s at it.

It probably would have made sense posting the article on ‘Tesco’s Vs. Sainsbury’s’ before I started reviewing anything from them… but I haven’t finished it yet!

Besides I was in Tesco’s the other day and this little puppy called out to me and pined… “I’m only £6.19 and in need of a good home”; so being a generous chap I obliged and here we are.

Wine puppies, I have found, find their way into your shopping basket as swiftly and deftly as their Canine brethren worm their way on to unguarded lap; you’re at the till before you know it and only vaguely questioning your purchase as you hand over the cash.

… And like our four legged friends, wine puppies can sometimes bite the hand that buy them.

I suppose I could pretend like I had a good reason to pick this up; some giveaway to indicate the quality of the wine in spite of its bargain price tag… but I didn’t.

I just liked the label…

Fortunately I got away with it!

So now I can pretend it was an inspired decision biased on sound deductive reasoning.

Well… I could until honesty got the better me, *sigh*.

Aside from the comedy name given to its region, wines from Valdepeñas are like so many of the other regions in Spain notable mostly for not being Rioja. Though there are similarities, after all we’re dealing with the same grape (Tempranillo) and probably the same methods of production and ageing.

It has a dark purple black core that becomes translucent and tawny as it reaches the edge, showing signs of its extended bottle ageing. Aromas of tobacco leaf and an earthy blackcurrant reach out from the glass with a smoky undercurrent and are met on the palate with dark black cherry and a whisper of vanilla.

This is very much a medium bodied wine, though one with a depth to it. Tannins are distinct and have grip to them but there’s a clear vein of acidity here that cuts through and seems to swiftly bring about balance for a long complex finish.

It’s a good little food wine and has both the tannins to handle roasted/grilled meats and also the acidity to slice through fatty foods. I even tried it with some spicy noodles to see how the tannin reacted to a bit of chilli heat and it passed with flying colours!

A bit of a culinary all rounder then.

Definitely a wine that benefits from breathing though and it improved throughout the evening, enhancing its aroma with some sweet spice and adding some savoury dark chocolate on the palate. In fact, this wine held up surprising well the next day and was still fresh with that vein of acidity propping it up.

When compared to Rioja it has a simplicity to it or a subtlety that Rioja tends to ignore in favour of power and intensity. The buttery qualities of Rioja are here, but the intense woody character and heady concentration that give some instant migraines… are missing.

In short a migraine friendly Rioja… having more in common with wines from the Languedoc region of France, than its famous northern cousin. 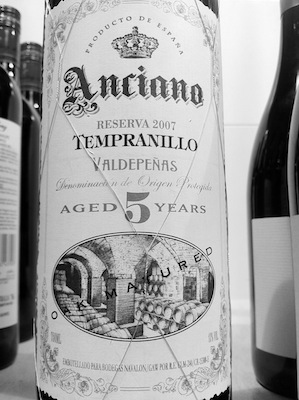 Another bargain to be found in the Mighty Co-Op… also try Waitrose for it’s older brother.

Is it worth the money?

But it’s not one of those wines that’ll make you squeal in delight and climb back in the car to pick up a few cases while it’s still on offer.

If you’re the kind of person who doesn’t mind waiting and taking their time to tease it out of its shell, then you’ll find a wine that’s surprisingly generous with it’s complexity for the money.

You’ll have a cracking midweek pasta/spag-bol wine at a budget price.

If you try this and like it, then the mighty Co-op has one too:

Thanks for reading, let me know what think.